Four Questions with Louisville Showing Up for Racial Justice

Jess Reese interviews Sonja Wilde-de Vries about Louisville Showing Up for Racial Justice.  Sonja is a documentary filmmaker, photographer and poet. Her films include “Out: The Making of a Revolutionary” and “Gay Cuba”, her most recent publications include an anthology “The Junkie Who Loved Horses” and her own work “The Hour of Departure” She has been an anti-racist activist since she was 17. 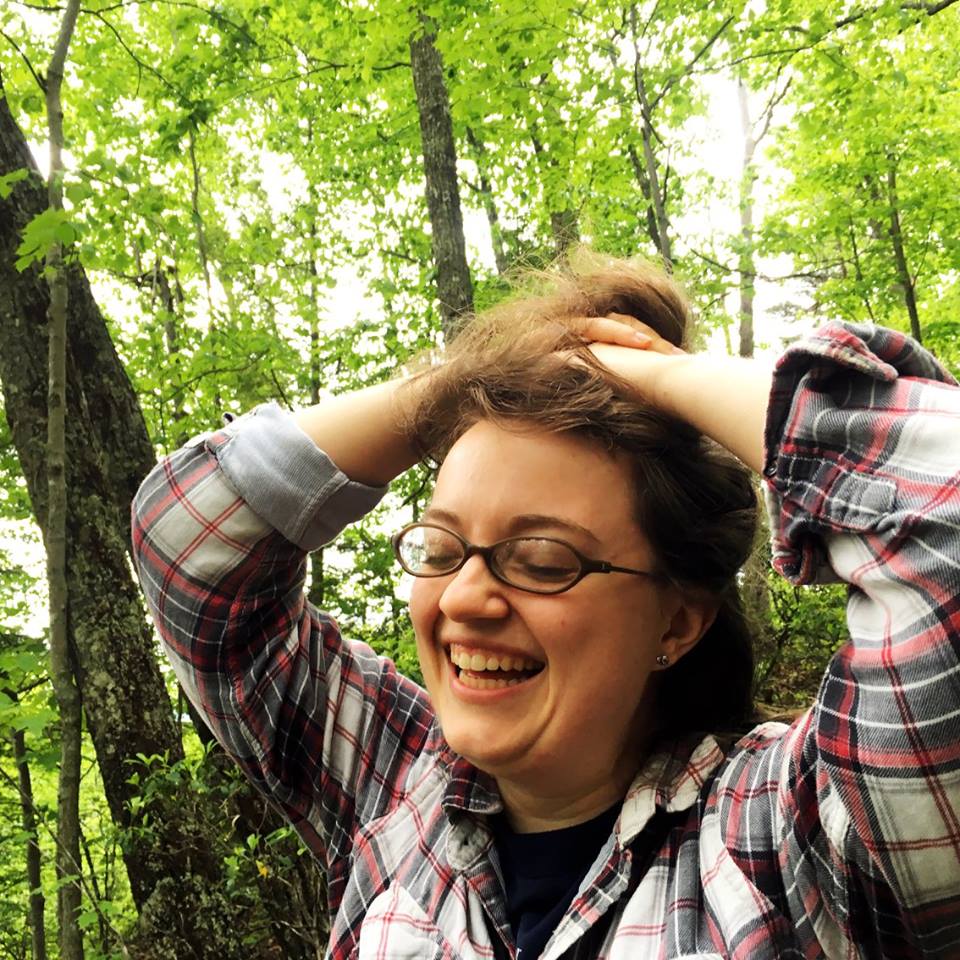 JESS: We’re going to be talking about the role white LGBTQIA people can play in racial justice movements and why we need to show up. Let’s start by introducing ourselves. My name is Jessica Reese. I usually go by Jess. I’m from east Tennessee originally and have lived in Louisville for five years. For the purposes of this conversation, it might be useful to share that I’m a cisgender white woman, and I’m bisexual. Who are you, Sonja? (I realize that’s a big question!)

SONJA: My name is Sonja de Vries. I am a pansexual, queer white woman and have been with LSURJ since it started here in Louisville. My activism started early, rooted in a family that lived through Nazi occupation (in the Netherlands) and resisted. I heard stories of resistance throughout my childhood. My mother as a child gathered toys to send to the Spanish fighting fascism and then was locked in a closet by her Nazi sympathizer teacher when the bombs were dropping. My grandfather escaped a Dutch concentration camp after being imprisoned there along with his brother. My grandmother risked her life and her family by hiding others whom the Nazis were persecuting in the floor space beneath the living room. So I learned about resistance and solidarity from them. 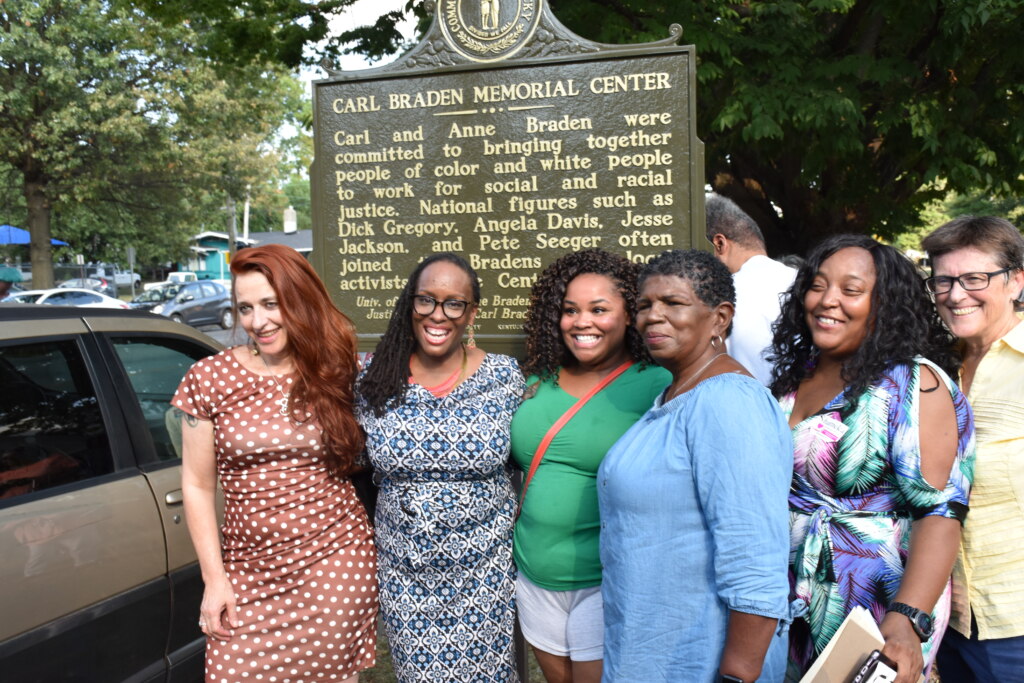 JESS: Could you talk a little about how you came to understand that struggles for LGBTQIA rights and struggles for racial justice are connected? Part of it for me came out of looking for history and just any kind of footing as a clueless queer person, and then learning about people like Sylvia Rivera. You watch Rivera’s big speech from 1973—she’s talking about jails and violence, and she’s calling out racism in white gay and lesbian groups, and she ends by crying out this cheer for gay power. And it’s clear that all of these fights are connected because it’s all her life, you know?

So that’s a piece of it—trying to learn about history because it’s powerful to me just to know that queer and trans people have always been here, but then being challenged by that history too. What about for you?

SONJA: I came out as a teenager and also considered myself a feminist. I was part of an organization of white folks who organized against the Klan and other white supremacist groups, and we were working under the leadership of a black and Puerto Rican led movement that was also anti-capitalist. I was introduced to writers like Audre Lorde and Barbara Smith, and the Combahee River Collective statement was something we discussed at length. I came to understand that mainstream white feminism was leaving a lot of people out—Black women, Indigenous women, Women of Color in general, as well as working-class and poor white women. Back when I came out, the story of Stonewall was still that it was a bunch of white gay men who led that uprising! So glad that young queers today are getting the real story.

JESS: Kind of continuing in the same vein: one of SURJ’s values is mutual interest. In SURJ, white people don’t get involved in racial justice fights because we’re trying to “help” or “save” people of color. It’s not charity. We’re trying to do our part to build the world that we want to live in too.

For white queer, nonbinary, and trans people, it’s worth lifting up that racist systems tend to be homophobic and transphobic as well, right? Take the legal system: we know it’s racist to the point of being deadly for people of color, especially Black people. We don’t need to look any further than Louisville for examples: Breonna Taylor, Shelby Gazaway, Darnell Wicker, and so many more. The legal system has also criminalized—and still criminalizes at times—how we dress, how we have sex, how we express our gender, and how we survive or make money. So I think there’s something specific at stake for us as we get into anti-racism work and support Black trans and queer people, who are most impacted by all of the above. What do you think about mutual interest, solidarity, and that tricky concept of allyship?

SONJA: This system (racialized capitalism) is built to benefit a minority of people at the top. It gives scraps (some of them chunky scraps!) to some folks, white privilege being part of that. And that’s deliberate. White supremacy is a construct and an ideology that binds this system together. Which is why you have a lot of white folks who have a hard time seeing that it is the system that is keeping them down and not their neighbor. But look at the rate of poverty in Louisville for example—in some neighborhoods it’s between 30%-50% of families living below the poverty level! And LGBTQ folks who exist across all class and racial lines—think of the energy spent on scapegoating and targeting LGBTQ folks while making some compromises that do not upset the system too much—like marriage equality, like joining the military. In fact, in some ways, though those concessions are important and were fought for, they also bolster the system and give credence to the lie that we can all be free under this system.

I don’t think that mutual interest is an easy one-line answer (which would be great, right?). What I do know is that in my heart and mind the statement that “if the most oppressed are leading, and, if the most oppressed win freedom, we will ALL be free” is the truest statement, because really, under racial capitalism, the majority of people suffer economically and also spiritually, mentally, physically on every level. Even the folks who have a fair amount of class privilege are dying at high rates from suicide and addiction—because this is an unhealthy, inhuman system on every level, and the more we can understand that, the more we can fight to transform it on deep levels instead of trying to get a slice of a very rotten pie.

What sustains you in this work, concretely, and what practices or moments ground you deeper in the work to overthrow white supremacy and this whole oppressive system?

JESS: I’m still figuring out the sustainability piece, but I really enjoy learning new things (shoutout to fellow nerds, we need you!). I’m often listening to a podcast like Justice in America or Strange Fruit, or I’m trying to read up on an issue or a part of history I don’t know as much about. (Along those lines, I recommend a great LPF blog post from over the summer: “Black Queer Lives Matter 101: An Introduction” by Heather Brydie Harris.) Learning what other people are up to, how they talk about their work, and how we got here in the first place—that all clarifies for me what I can do. This might not be everybody’s experience, but knowing more and getting specific helps me feel less overwhelmed, not more overwhelmed. Then everything feels more sustainable. What about for you?

SONJA: Reading is one important thing for me. I reread James Baldwin in particular because I think he has so much to teach us, and he goes so deep and has such a tender, fierce regard for humanity. His fiction as well as essays have taught me more about racism and about the construct of white identity than almost anything else I’ve read. Also, being in nature and in community—both things remind me why I still love being in the world (and we all need antidotes to despair) and why I continue to fight for social, economic, and racial justice…and environmental justice, because if we don’t fight for that too, we may not have anything left. Also, it’s the relationships. The other day I was marching, and sometimes I’m kind of shy, believe it or not, but I ended up racing to keep up with a veteran in a motorized wheelchair and we had such a good time laughing and talking. These are some of the things that keep me going.